skip to main | skip to sidebar

This is an example of a genuine dissident voice. This woman attempts to expose the psych warfare, manipulation and games played by the Democrats or whoever is behind them nowadays.

She tells a story of how she was attacked by ANTIFA, even being a person of color herself, because of her political views.

It seems to me she is just deconstructing and exposing a con job or a method of deception. That is what gets her targeted by the opposition.

This is an example of recognizing how deception works. It's not about politics parties because each side has their own 'front, con and routine' as the old criminals used to describe it.

She's saying what I have been saying for years and it's gotten me called a Nazi and even the word racist was used by the people trying to help frame me at major educational institutions in 2016 when threatening email/faxes were sent to law enforcement using my name.

She has more ability to accomplish what I cannot as easily by being a woman of color. Hell i didn't think genuine human beings who were real dissidents actually existed anymore or at least we were marginalized so severely over the past ten years we've been ignored.

It's about time.
Posted by On_GangStalking at 14:19

It seems that news sources that were left and credible that gave an alternative slant on things are running for cover as the environment becomes hostile towards anything that doesn't line up with the agendas of those in power.

Add to this that the internet seems to be filled with news that has authorities claiming that recent lone shooters are found to be conspiracy theorists or have anti government websites. Interestingly during the Obama administration, the witch Hunt was geared towards all lone shooters suddenly being white supremacists or racists. The Obama administration was attempting to continue their crusade against Constitutional government and make hate speech laws as well as get racism down as an actual mental disorder in the psychiatric book of official disorders.
(They were also abusing some legal things purposely written into Obama Care so that people's medical records could easily be used in a frame up. Consequently that is exactly what happened. Trump has since reversed this.)

So there was a rise in lone shootings during Obama. This is also when funding was shifted from foriegn terrorism to domestic security and alot of troops came home and got jobs in the private sector.

Creating bogey men can be profitable. Many complained about the pretense under which Bush began this war after 9-11 but we didn't have to deal with the carnage directly at home. Now this same process potentially is a direct threat to our schools, our own property and lives that it serves as intimidation. We don't dare question authorities theories about who is potentially dangerous... basically output of fear of being shot.

Also no one in this country is going to actually admit or try to establish the theory that lone shooters can be made and used as tools of intimidation so the issue will never be solved. Thus anyone that authorities want scapegoated will be silenced because society cant afford any mistakes. Even though potentially it's authorities causing the violence for profit to begin with.
Create jobs, ensure social control and neutralize dissidents. Sounds pretty damn military to me.

Under these current conditions where racism, anti govt or conspiracy theory is being directly or loosely associated eith lone shootings, people are going to try to protect themselves from persecution.

It's interesting that there's this recent close ties with Russia and China interfering in our country because the recent tactics of control are very communist and Russian in nature.

Recently many legit news outfits that in years past leaned towards supporting alternative theories or at least tipping their hats to that content have been backing up as fast as they can if you will to avoid being associated with anything of the kind or even going against the agendas. Many are outright serving the propaganda machine actually assisting in the persecution of alt news and conspiracy theorists.

Sadly many of our former sources of slightly alt views are no longer in line with that.

It is very nasty out there right now. Though many of us knew Alex Jones was good for exposure and leads but his demeanor was unacceptable and he probably was a plant social media companies banning him is ridiculous. Yet it brings up an interesting point we all need to face now which is that social media is run by private companies thus not ensuring Constitutional rights as govt would.

We are the ones who were asleep at the wheel, allowing them to take that power. This is a cautionary tale and lesson right from my youth where Gen X knew that corporate take over of our everyday lives wasn't going to end well..and here we are.

Why private companies are allowed to take over something created by the US Govt (internet) makes no sense but we've allowed it to happen. Now we depend so much on corporate for our lives to run, our world even that seperstinf from it may mean no longer being part of what is defined as the world or society today.

Anyone who doesn't conform to these new standards will be left outside of what's defined by most people as 'society' to exist in an alternate place. It's almost like being banished to live outside of a controlled physical environment they've built for people to live in, say domed cities or similar.

Govt and laws no longer matter nor does the Constitution. Just living in the United world of corporateland.

We must realize most people mostly in Liberal areas don't even know the laws or thier rights. They know the RULES of the corporate PC culture. Many believe these are actual laws of the United States which is horrifying every time I encounter this.

Disinformation is different from fake news sites. Propaganda is something different as well as conspiracy theory is. Disinformation is a subtle art form. Influence through legit news sites is even more subtle, we live with it every day and accept it as part of life. Normal background noise in the every present media that accompanies us now everywhere we go.

It's one thing to utilize counter measures to silence or neutralize dissidents. It's quite another to outright frame people, silence them, destroy the US Constitution and utilize intimidation through violence so the American public will by their own hands create a China or Russia to live in.

At least it makes it now obvious that people are weak in battle, anything closely aligned with the mainstream may fall first and that most people don't value their freedom so it's still up to truth seekers and dissidents to at least point it out to them.

Again I ask the same question:
If any of this is actually legit then why was so much effort taken to frame me, a relatively unimportant activist and blogger? How could so many professionals lie and risk their careers and pensions? Is it that they are depending on my being too poor and uneducated to defend myself?

So this is the future? A world where not everyone is protected under the US Constitution unless they have an amendment that says they are a 'protected class's? That people who are without means are freely persecuted and denied civil, human rights as well as their right to a trial, due process and even to face their accusers? Just for writing a blog.

The public is now so inflamed with Marxist brianwashing or so afraid from threat of death or loss of job security that they are accepting any methods of silencing whoever is necessary in order to please those with power and authority even if it's destroying the Inited States of America and all it stands for-for the people. Not the military industrial complex or any part of the Complex at large nor globalism.

In order to fight the oppression that is the true threat of our age we must be heard and have some legitimacy. The news sources that stood near us not so much by us, are moving as far away as possible now and we must not become lost, disillusioned or distracted.

Looking in hindsight this had the potential to happen. It's no surprise.

Hopefully it will either blow over, the assholes will move onto something else or we can find new and alt ways to be heard and be safe as our nation intended.

Here's an example of the disinfo and propaganda and influence used in this confusing, chaotic media environment right now.
In reference to the Las Vegas lone shooter we have theories put forth about terrorist ties to the shooter which if anyone recalls were mentioned after the shooting especially in connection with his GF from the Philippines who he sent away before the incident occurred.

This is put forth as a theory by trusted authority figure a congressman.

Then a similar theory is complained about by news sites when it's seen as wreckless due to being put out my former govt insiders who worked in intelligence and the White House. It has dangerous consequences simply because it was repeated on the internet perhaps intimated as fact:
https://www.politico.com/magazine/story/2018/11/16/conspiracy-theory-las-vegas-shooting-dangerous-222576

Then theres news sources reporting that evidence has been found that the shooter was a conspiracy theorist.
It's ironic that the story I happen to find was by The Guardian, LOL but this I guess just proves the point of the first link above concerning their new role as careful propaganda machine:
https://www.theguardian.com/us-news/2018/may/19/stephen-paddock-las-vegas-shooter-conspiracy-theories-documents-explained

So we are being led to believe by intimations that being a conspiracy theorist is a risk factor for becoming an active lone shooter or other violent actions.
Note that the effect of the story basically suggests that the case is solved and that's the reason why it happened thus serving the purpose of neutralizing dissent and also blanking out any thought of considering any evidence of connections to terrorism as that theory still stands.

People don't just snap for no reason.  This idea that unknown 'mental illness' is responsible for people becoming lone shooters and it's expressed through not trusting authority or theorizing about corruption from the power structure is absolutely ridiculous and basically a modern US version of Russian style punitive psychiatry. When are we going to be thrown into Goolag prisons next and interrogated endlessly?

So it's "dangerous" for qualified persons to make theories based on evidence because that might be repeated by irresponsible news sites and spring on a dangerously dumbed down, fatigued, frightened public but it's not dangerous to basically frame every conspiracy theorist with the profile of potential lone shooter???!

I think I've made a point here.
Posted by On_GangStalking at 13:09 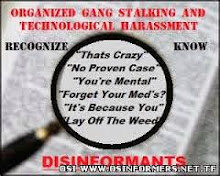